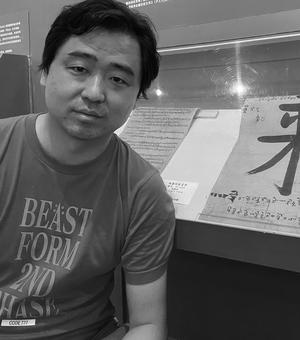 Zhan Zhang is a philologist of ancient Iranian languages, with a focus on Khotanese, an eastern-Iranian language spoken in the oasis-state of Khotan (in present-day Xinjiang, China) during the sixth to the eleventh centuries CE.

He is particularly interested in secular Khotanese documents, through which he listens to the voices of Khotanese people and elucidates on various aspects of life in Khotan, such as the bureaucratic administration system, taxation procedures, corvée work distribution, and contractual conventions. In these documents Khotan emerges as a small state in a strategic location with limited resources that is constantly adjusting itself between Tang China and the Tibet Empire in order to retain a degree of autonomy.

This differs somewhat from the imaginations of those involved in “silk road” studies of Khotan as a prosperous, glamorous entrepôt. As post-doctoral researcher on Oxford’s Invisible East programme, he will facilitate communications between scholars working on different corpora of secular documents from the ancient world, such as those from Dunhuang, Cairo Geniza, and Oxyrhynchus. He obtained his Ph.D. from Harvard University in 2016. In 2017-18, Zhan Zhang worked as a Visiting Research Scholar at the Institute for the Study of the Ancient World, New York University. After that, he went back to China and founded Ardashir Space Station, an online education platform on ancient civilizations.

He has a podcast in Chinese called Tianshu (lit. ‘the Celestial Book’, meaning ‘gibberish’ in Chinese), mainly on ancient history and languages, though he does have an episode on String Theory as well.